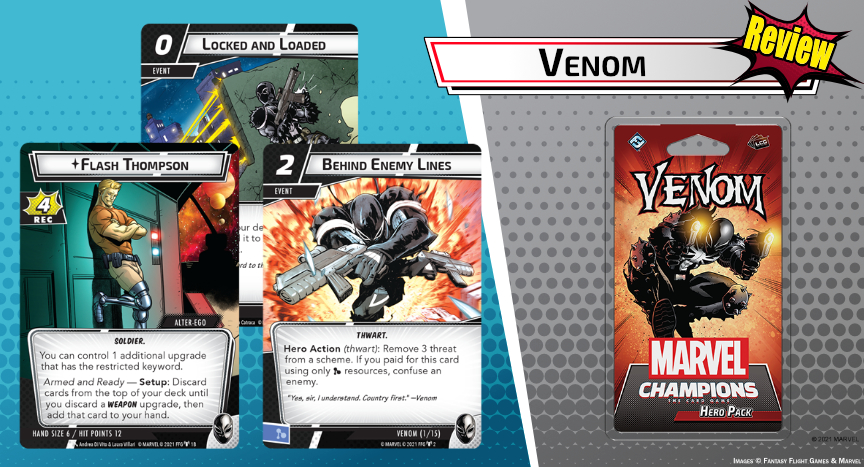 “”Eyes. Lungs. Pancreas. So Many Snacks, So Little Time.”

Venom was a hero I was definitely looking forward to – I’ll admit it, I’m a sucker for a good antihero, and I was surprised and happy to see Venom in his Space Knight incarnation. Let’s hope they do something fun with that trait later… In this article we’ll take a look at what Venom’s good at, what he’s bad at, and quickly show you our current favourite deck for 2-player expert difficulty.

Venom right out of the gate is an absolute powerhouse of a character. Honestly I find it difficult to highlight his strengths because I feel like it’s…everything about him. Venom has the tools to deal a ton of damage while thwarting, taking hits and paying for expensive, flashy cards.

His support, Project Rebirth 2.0 is a better Aunt May, and Aunt May was already one of the best supports in the game. You almost never spend more than a single turn in alter-ego due to Flash Thompson‘s base 4 recovery and 3 healing from Project Rebirth meaning he can heal for a whopping 10 health before flipping back into hero form split across two turns, and the 6 from Project Rebirth alone is typically more than enough, allowing you to get the maximum usage out of his hero powers.

Multi-Gun is one of the best upgrades printed so far, with a huge range of uses, but one of its best is simply being able to remove 2 threat from a scheme every single turn. This lets you keep schemes under control effortlessly, especially in easier content without ever thwarting (it’s not a Thwart action, so it even ignores things like Patrol and Confusion!).

I could go on and on about the strengths of this hero, because every card in his deck is just a slam dunk. But I won’t – just know that Venom is good.

As you might have guessed, Venom’s weaknesses are… few in number. Flash Thompson’s Setup ability discards cards from the top of your deck until you discard a weapon, and then adds that weapon to your hand. This is actually a bit dangerous, because if you happen to draw multiple weapons (or, Stan Lee forbid, all of them) in your starting hand, you will just immediately discard your entire deck. As it is, if you’re unlucky, it can and will discard almost your entire deck, but… the upside is you can get one of Venom’s insanely powerful weapons in hand turn 1. Wait no, this is the weaknesses section…

For our deck, I chose to go with Aggression. Venom has exactly what I look for in an Aggression character – the ability to survive when pulling in minions, weapon synergies, resource generation, and importantly, strong built-in threat removal to compensate for a lack of thwart from Aggression. Check out our list over on MarvelCDB.

The deck’s basic strategy is to get Multi-Gun and Jarnbjorn in play as early as possible, keep the minions clear (as far as I’m concerned this is always Aggression’s primary purpose) and use Multi-Gun to remove threat every single turn while beating away at the villain.

Jarnbjorn is a key pick in this deck as although adding another weapon increases your odds of not hitting one of Venom’s admittedly much more powerful guns early on, you can use it for Fusillade, a powerful new card from Venom’s hero pack which dishes out tons of damage

With Multi-Gun and Bug in play, you can basically remove 3 threat for free every single turn, which frees you up to focus on dealing just as much damage as possible. Our version runs “You’ll Pay For That!” because we paired him up with a Protection character that needed a little extra thwart, so you can absolutely swap that for more resource generation if there’s a Justice character on the field. Bring It, while very limited and conditional, typically has its worst case scenario being replacing itself to get through your deck faster to either pull up weapons or recycle your most powerful events, and can be insanely powerful if you end up pulling out Venom’s nemesis (which is a horde of squishy 2hp minions who honest feel like more of a benefit than an impediment sometimes).

I honestly feel like Venom may be a little too strong. He can fill any role with ease, and excel at whatever you put in front of him. I’m one of those people who will argue that Doctor Strange is honestly not that overpowered despite the entire world screaming otherwise, but… I would absolutely say Venom is as powerful, if not more powerful than Mr Doctor. Venom’s a powerhouse that is clearly made to play the hardest challenges available. Galaxy’s Most Wanted, look out. 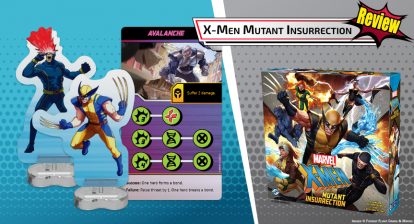 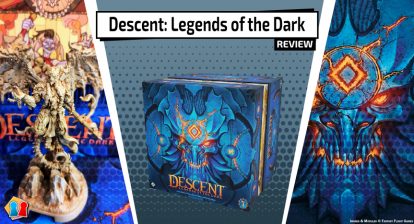